As I wrote about the picture book, It Will Be Okay, I realized that overcoming fear and doubt is a prevalent theme in children's books--and that there are so many wonderful books that approach it so well!  I hope you will enjoy this list and that it might be helpful to you and the young people you love reading with.  Mercer Mayer and Kevin Henkes seem to have childhood fears all figured out and they each have multiple books on this list to prove it! 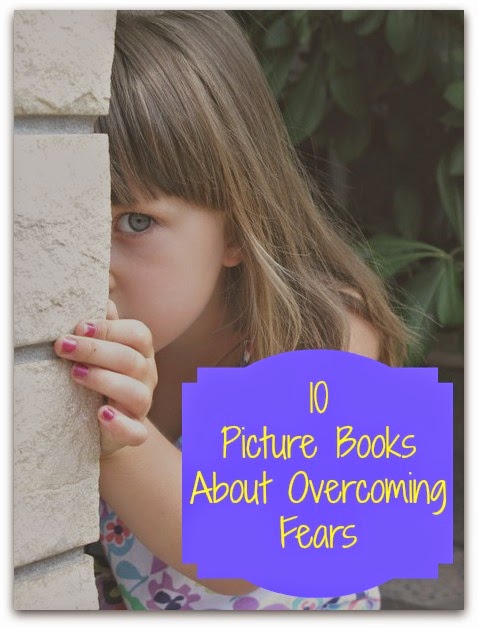 Mirette on the High Wire

Mirette was always fascinated by the strange and interesting people who stayed in her mother's boarding house. But no one excited her as much as Bellini, who walks the clothesline with the grace and ease of a bird. When Mirette discovers that fear has kept him from performing for years, she sets out to show him that sometimes a student can be the greatest teacher of all. Full color.

A timid dragon rescues a princess in order to become a brave knight in armor, but his efforts are misunderstood.

Laszlo is afraid of the dark.
The dark lives in the same house as Laszlo. Mostly, though, the dark stays in the basement and doesn't come into Lazslo's room. But one night, it does.
This is the story of how Laszlo stops being afraid of the dark.
With emotional insight and poetic economy, two award-winning talents team up to conquer a universal childhood fear.

Sadly, Amazon doesn't offer a "blurb" on this book, and it is out of print.  But you can view my review here.

Kate has a problem. She's terrified of her aunt's big bulldog. Kate's aunt calls the dog Cookie. Kate calls it a monster! One day, after fleeing the apartment to escape Cookie, Kate takes the strangest elevator ride ever--complete with a mysterious package and floor after floor of real-life monsters! It takes all of her courage, but Kate soon finds that the monsters aren't so scary after all. Kate makes some new friends, and she discovers the perfect way to tame her own personal beast. This warmly written, beautifully illustrated book is certain to be a favorite among all children (and adults) who have been afraid at one time or another.

Little Chester Raccoon, the beloved character who has helped so many children with issues in their lives, learns the meaning of bravery and a method for overcoming his fears in this new Audrey Penn title. After sharing the story of a little bird who is afraid to have flying lessons in front of his friends, Mrs. Raccoon tells Chester that being brave doesn’t mean being unafraid; being brave means not letting that fear stop him. Mrs. Raccoon teaches Chester an important strategy: Think-Tell-Do. When he thinks he is afraid, he tells himself he can do it, and then he just does it. Of course, getting a Kissing Hand helps a little too. This simple strategy can be helpful to children in many different situations.


by Kevin Henkes
published by

Written and illustrated by Kevin Henkes, the nationally bestselling and celebrated creator of Lilly's Purple Plastic Purse, Owen, and Kitten's First Full Moon, Shelia Rae, the Brave is a warm, humorous, and loving story of sibling sympathy and support. Just because Sheila Rae is older, she doesn't always know better!

"I am very brave," Sheila Rae said, patting herself on the back. She wasn't afraid of anything—not thunder, not lightning, not the big black dog at the end of the block. And when she wanted to walk home a new way and Louise wouldn't, she called her sister a scaredy-cat and set out alone. But all the bravado in the world failed to help when Sheila Rae found herself lost. Luckily, her sister was not far behind.

Owen had a fuzzy yellow blanket. "Fuzzy goes where I go," said Owen. But Mrs. Tweezers disagreed. She thought Owen was too old for a blanket. Owen disagreed. No matter what Mrs. Tweezers came up with, Blanket Fairies or vinegar, Owen had the answer. But when school started, Owen't mother knew just what to do, and everyone -- Owen, Fuzzy, and even Mrs. Tweezers -- was happy.

Wemberly worried about spilling her juice, about shrinking in the bathtub, even about snakes in the radiator. She worried morning, noon, and night. "Worry, worry, worry," her family said. "Too much worry." And Wemberly worried about one thing most of all: her first day of school. But when she meets a fellow worrywart in her class, Wemberly realizes that school is too much fun to waste time worrying!


by Patricia Polacco
published by Puffin

Grandma consoles her frightened granddaughter by telling her that the dark clouds of the impending storm are nothing more than the ingredients for a Thunder Cake.
Courage

There's an Alligator Under my Bed


by Mercer Mayer
published by Dial

The nightmare's gone, but what about that alligator? You have to be so careful getting in and out of bed! Maybe a midnight snack to lure him into the garage will do the trick. In this funny and beloved follow-up, Mercer Mayer faces another nighttime fear head-on.

Deep in the sea there lives a happy school of little fish. Their watery world is full of wonders, but there is also danger, and the little fish are afraid to come out of hiding . . . until Swimmy comes along. Swimmy shows his friends how—with ingenuity and team work—they can overcome any danger. With its graceful text and stunning artwork, this Caldecott Honor Book deserves a place on every child’s shelf.

Brave Irene is Irene Bobbin, the dressmaker's daughter. Her mother, Mrs. Bobbin, isn't feeling so well and can't possibly deliver the beautiful ball gown she's made for the duchess to wear that very evening. So plucky Irene volunteers to get the gown to the palace on time, in spite of the fierce snowstorm that's brewing-- quite an errand for a little girl.


But where there's a will, there's a way, as Irene proves in the danger-fraught adventure that follows. She must defy the wiles of the wicked wind, her most formidable opponent, and overcome many obstacles before she completes her mission. Surely, this winning heroine will inspire every child to cheer her on.
Brave Irene is a 1986 New York Times Book Review Best Illustrated Book of the Year.