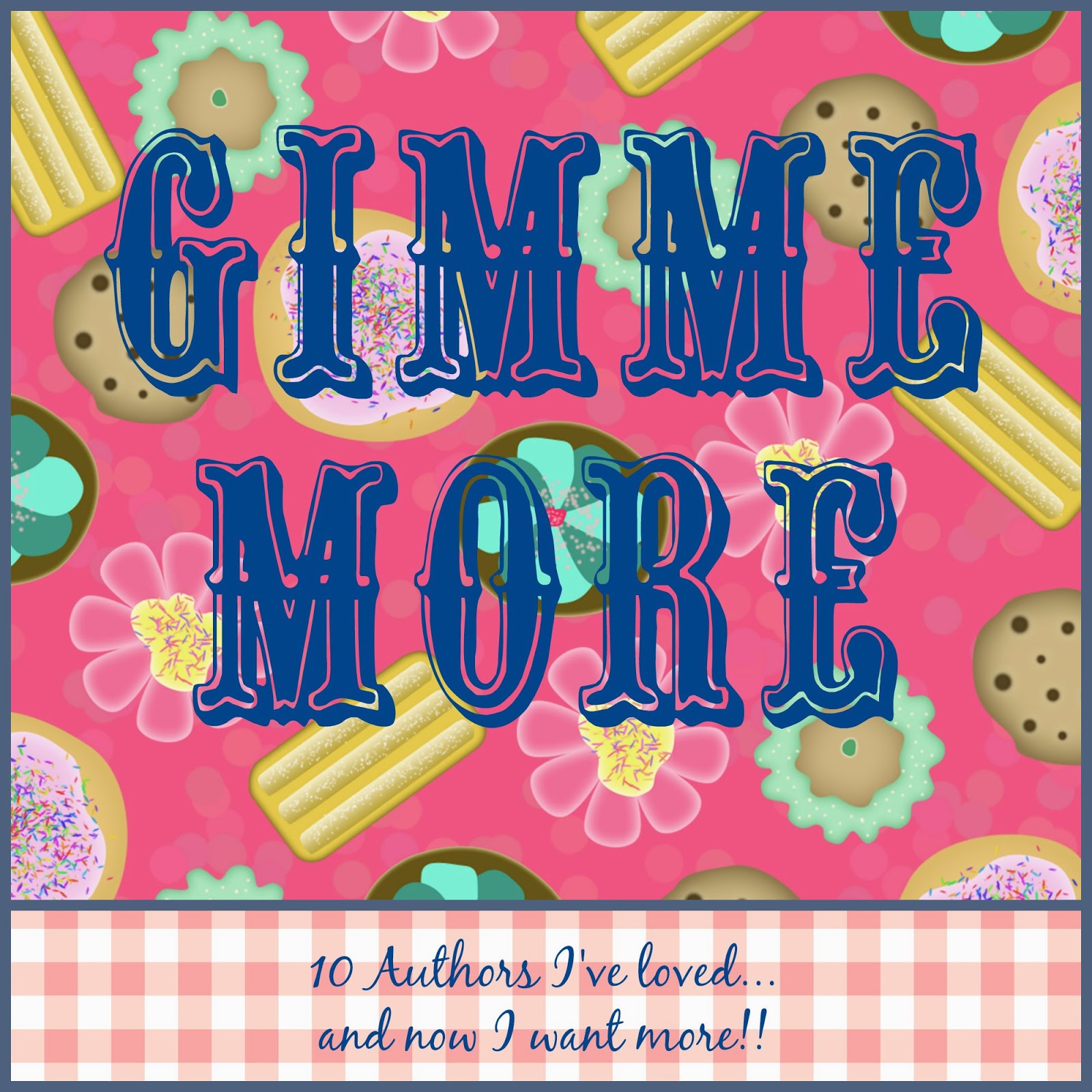 I believe in love at first read.  It isn't a myth, people.  Some of my favorite authors had me from the very first page.  And when I fall, I fall hard.  I am unapologetic for my love of William Faulkner, Charlotte Bronte, Tiffany Baker, C.S. Lewis, Virginia Lee Burton, and Jack Kent. And these aren't all my scandalous love affairs, y'all.  There are a ton.

Here are a few authors whose books I have loved--though I've just read one--and I really need to read more!!

1.  Joanne Rocklin blew me away with Fleabrain Loves Franny. It wasn't what I expected and it was an awesome middle grade read.  This one looks particularly good to me:

When a mysterious man arrives one day on Orange Street, the children who live on the block try to find out who he is and why he’s there. Little do they know that his story—and the story of a very old orange tree—connects to each of their personal worries in ways they never could have imagined. From impressing friends to dealing with an expanding family to understanding a younger sibling’s illness, the characters’ storylines come together around that orange tree.Taking place over the course of a day and a half, Joanne Rocklin’s masterful novel deftly builds a story about family, childhood anxieties, and the importance of connection. In the end the fate of the tree (and the kids who care for it) reminds us of the magic of the everyday and of the rich history all around us.

2.  Kristyn Crow reeled me right on in with Zombelina.  I loved everything about it--right down to the lovely illustrations by my pal, Molly Idle.  But she has several other lovelies out there too, like this perfect little Halloween read:

A spooky Halloween read-aloud guaranteed to tickle the smallest funny bones!After nine lives, Skeleton Cat is back for his tenth. And he has big dreams: to be a drummer. So he rattles and shakes his way through town to find the perfect band. And this phantom cat cause quite a hilarious scene.Kristyn Crow's punchy beat, rollicking action, and clever rhyme paired with Dan Krall's ghoulishly charming art makes Skeleton Cat a perfect, catchy read-aloud for all ages.

3.  Do you remember how you belly laughed at Brief Thief by Michael Escoffier?  I know I do!  I'm annoyed with myself that I haven't read all of his books!  I think I would want to start with this one:

Childhood is a magical time when even the stuff of the day-to-day is exciting and the ordinary often seems extraordinary. A part of this magic is that with just a little imagination, we all might be found to possess true superpowers!

This isn't the first or last book where a child delightedly discovers her own superpowers. But it may be just about the driest, funniest, and sweetest, where the discovery is handled with humor and charm.
One of the book's true pleasures is that it's a girl who discovers her own extraordinary abilities, and when her powers fail, as they must, she discovers them in her mom. All of which leads to a lovely intimacy between the two.


4.  Warning!  Don't gasp when I say this!  Rainbow Rowell--hard to believe, I know.  I absolutely fell in love with Eleanor & Park, but I really need to read all the other fabulous books she's written!  I have just barely started Landline, so I will remedy this soon!!

From New York Times bestselling author of Eleanor & Park and Fangirl, Rainbow Rowell, comes a hilarious, heart-wrenching take on love, marriage, and magic phones.  Georgie McCool knows her marriage is in trouble. That it’s been in trouble for a long time. She still loves her husband, Neal, and Neal still loves her, deeply—but that almost seems beside the point now.

Maybe that was always beside the point.
Two days before they’re supposed to visit Neal’s family in Omaha for Christmas, Georgie tells Neal that she can’t go. She’s a TV writer, and something’s come up on her show; she has to stay in Los Angeles. She knows that Neal will be upset with her—Neal is always a little upset with Georgie—but she doesn’t expect to him to pack up the kids and go without her.
When her husband and the kids leave for the airport, Georgie wonders if she’s finally done it. If she’s ruined everything.
That night, Georgie discovers a way to communicate with Neal in the past. It’s not time travel, not exactly, but she feels like she’s been given an opportunity to fix her marriage before it starts. . . .Is that what she’s supposed to do?  Or would Georgie and Neal be better off if their marriage never happened?

5.  Andrew Prahin.  I really loved Brimsby's Hats.  Really.  I have been cyber-stalking Andrew Prahin...he seems to be creating lovely art, but none in the written form   yet--unless you count his witty tweets. Can't wait for another book from this guy!


6.  Liane Moriarty.  The Husband's Secret was one of those great books you just can't put down.  I read it with my book club and we all enjoyed.  Lots of great conversation came from that one, for sure!  My only problem is that I can't decided whether to read What Alice Forgot or Big Little Lies next!  Ah, decisions, decisions!!

Alice Love is twenty-nine, crazy about her husband, and pregnant with her first child.  So imagine Alice’s surprise when she comes to on the floor of a gym (a gym! She HATES the gym) and is whisked off to the hospital where she discovers the honeymoon is truly over — she’s getting divorced, she has three kids, and she’s actually 39 years old. Alice must reconstruct the events of a lost decade, and find out whether it’s possible to reconstruct her life at the same time. She has to figure out why her sister hardly talks to her, and how is it that she’s become one of those super skinny moms with really expensive clothes. Ultimately, Alice must discover whether forgetting is a blessing or a curse, and whether it’s possible to start over…

Sometimes it’s the little lies that turn out to be the most lethal. . . .A murder… . . . a tragic accident… . . . or just parents behaving badly?  What’s indisputable is that someone is dead.  But who did what?

Big Little Lies follows three women, each at a crossroads:
Madeline is a force to be reckoned with. She’s funny and biting, passionate, she remembers everything and forgives no one. Her ex-husband and his yogi new wife have moved into her beloved beachside community, and their daughter is in the same kindergarten class as Madeline’s youngest (how is this possible?). And to top it all off, Madeline’s teenage daughter seems to be choosing Madeline’s ex-husband over her. (How. Is. This. Possible?).
Celeste is the kind of beautiful woman who makes the world stop and stare. While she may seem a bit flustered at times, who wouldn’t be, with those rambunctious twin boys? Now that the boys are starting school, Celeste and her husband look set to become the king and queen of the school parent body. But royalty often comes at a price, and Celeste is grappling with how much more she is willing to pay.
New to town, single mom Jane is so young that another mother mistakes her for the nanny. Jane is sad beyond her years and harbors secret doubts about her son. But why? While Madeline and Celeste soon take Jane under their wing, none of them realizes how the arrival of Jane and her inscrutable little boy will affect them all.
Big Little Lies is a brilliant take on ex-husbands and second wives, mothers and daughters, schoolyard scandal, and the dangerous little lies we tell ourselves just to survive.


7.  The Lions of Little Rock was incredible, so, or course, I want to read more of Kristin Levine!  This one also focuses on race and an unlikely friendship:

The last thing Harry "Dit" Sims expects when Emma Walker comes to town is to become friends. Propertalking, brainy Emma doesn't play baseball or fish too well, but she sure makes Dit think, especially about the differences between black and white in the 1910s. But soon Dit is thinking about a whole lot more when the town barber, who is black, is put on trial for a terrible crime. Together Dit and Emma come up with a daring plan to save him from the unthinkable.

8.  I just read Kimberley Griffiths Little's The Time of the Fireflies and really enjoyed it.  I already bought When the Butterflies Came to read next and can't wait to read it--as soon as I get it away from my daughter!

A moving story of a young girl's struggle with love, loss, family, and magic from the beyond, from critically acclaimed author Kimberley Griffiths Little.

Everybody thinks Tara Doucet has the perfect life. But Tara’s life is anything but perfect: Her dear Grammy Claire has just passed away, her mom is depressed and distant, and she and her sister, Riley, can’t agree on anything. But when mysterious and dazzling butterflies begin to follow her around after Grammy Claire’s funeral, Tara knows in her heart that her grandmother has left her one final mystery to solve. Tara finds a stack of keys and detailed letters from Grammy Claire. Note by note, Tara learns unexpected truths about her grandmother’s life. As the letters grow more ominous and the clues harder to decipher, Tara realizes that the secrets she must uncover could lead to grave danger. And when Tara and Riley are swept away to the beautiful islands of Chuuk to hear their grandmother’s will, Tara discovers the most shocking truth of all, one that will change her life forever. Kimberley Griffiths Little weaves a magical, breathtaking mystery full of loss and love, family and faith.


9.  Jennifer Ziegler totally impressed me with her latest book, so now I'm working backwards...I would love to read this fun novel from her next:

Maggie Dempsey is tired of moving all over the country. Her parents are second-generation hippies who uproot her every year or so to move to a new city. When Maggie was younger, she thought it was fun and adventurous. Now that she’s a teenager, she hates it. When she moved after her freshman year, she left behind good friends, a great school, and a real feeling of belonging. When she moved her sophomore year, she left behind a boyfriend, too. Now that they’ve moved to Austin, she knows better. She’s not going to make friends. She’s not going to fit in. Anything to prevent her from liking this new place and them from liking her. Only . . . things don’t go exactly as planned.

10. Kay Honeyman.  I really enjoyed this author's debut YA novel, The Firehorse Girl.  And apparently, she's been busy since having it published:  she has another book, Interference, coming soon!

Once it's on @PublishersWkly it's official! Big thank you to @rostimo.So excited to work with @chavelaque again! pic.twitter.com/HUWxU2GZYq
— Kay Honeyman (@kayhoneyman) August 8, 2014